Turn off the TV set, set aside your household chores for a minute and set off on shopping trips, people do not live by bread alone. Not all of us living on this earth can leave our mark for future descendants, so let us remember those who wrote beautiful canvases and left imperishable lines of poems, to whose poetry we turn in moments of spiritual unrest and discord with ourselves and inexplicably - the mysterious glance of Mona Lisa from time immemorial will tell us what none of his contemporaries will tell ...

I invite you to a meeting with the Irish poet William Butler Yeats, who, summing up his life, said:

"I have nothing, but only a book." 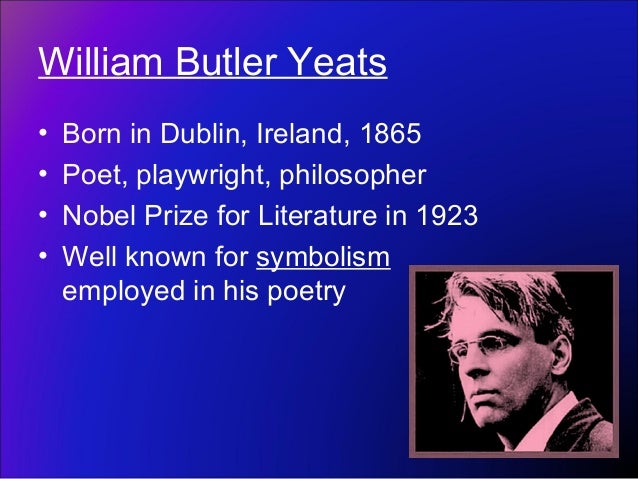 And, of course, one cannot talk about Sligo, about this Irish land, without saying that this land is called the land of William Butler Yeats, the great son of the Irish people, the poet, the Nobel Prize Winner. A native of Dublin, he always spent his childhood years here, in the family of his relatives, and later, becoming an already world-renowned poet, again and again came to Sligo to find poetic inspiration.

When, after a failed search for the Spanish brigantine, being in the western part of Ireland on the instructions of the editorial board, my colleague and I from the newspaper decided to return to Sligo. But on a narrow mountain road in the mountains, it was impossible for two cars to disperse and had to cuddle up to the very edge in order to skip the oncoming car or move backwards, like a cancer ... The feeling was as if we had fallen into an impassable jungle and that time had stopped Ringing silence and indescribable I felt peace everywhere on our way.

Lough Gill lake is situated both  in co. Sligo and  co. Leitrim

And suddenly, behind the age-old trees, before us arose a huge and majestic lake, stretched among the mountains ... We left the car to stretch our legs and look around. At that moment I did not even immediately realize that fate itself led us to the lake, which William Yates sang and to whose sources he returned all his long life, to Lake Lough Gill. .. Tourists seem to have been here from all over the world ... An excursion to the castle or by boat, whatever you wish. I did not want either one or the other - I stood and looked at the lake, which inspired the poet.

Unusual peace and quiet reign here ... cities seemed to be as far away as if in a different life. I remembered the lines that Yeats dedicated to this beautiful and majestic lake

From my article for '' Nasha Gazeta''

Turn off the TV set, set aside your household chores for a minute and wait a while with shopping, people do not live by bread alone.

Not all of us living on this earth can leave our mark for future descendants, so let us recall those who wrote beautiful canvases and left imperishable lines of verses to whose poetry we turn to in moments of spiritual unrest and discord with ourselves and inexplicably mysterious Mona Lisa's glance from time immemorial will tell us what none of his contemporaries will tell ...

I invite you to meet the poet William Butler Yeats and devote a few minutes to his inspired life.

Yeats’s manuscript collection at the National Library of Ireland is one of the greatest literary collections of the poet in the world — it includes poems, plays, stories and short stories, articles, essays, political and literary speeches, lectures and radio scripts, diaries and letters ... The poet lived 74 years, and lived as he understood his purpose in this world. According to his biographer, Yeats lived several lives, inseparable from the development of poetry and the awakening of the spirit of Irish self-consciousness. The Yeats's Museum in the centre of Sligo, Ireland

In the poet’s museum in the center of Dublin, the man’s manuscripts, books published during his lifetime are presented in his book. The very atmosphere of the museum, where you will hear the live voice of the poet, recorded on tape during his lifetime to the happiness of his descendants, you and I, will help to understand what Yeats wrote and what his soul found comforting. “For inspired poetic creativity, conveying the national spirit in a highly artistic form.” William Yeats was awarded the Nobel Prize and when presenting this high award to the world community, he noted that it was less than his reward, that it would recognize Ireland as a state all over the world. Probably there is some truth in his words, but I would like to cite as an example words illustrating his talent -

“I spent my whole life clearing every phrase written for the eye from the poetry and returning back to the syntax of what was created for the ear. Write for the ear, I thought that you should be understood, as an actor or a folk singer, standing on the stage in front of the audience, will be understood''.

“Genius is talent, multiplied by hard work,” said one of the ancients.

The Momument to W.B.Yeats in the centre of Sligo

William Butler Yeats was born in 1865 in Sligo. No one can determine when a poet is born in a person, and what drives him, causing him to suffer from the torments of creativity and not knowing in advance — and whether it will bring at least some money ... Perhaps he was inspired by the example of his father, who left a profitable mill and ship business and went to the artists, not having gained neither fame nor money ... Already in childhood, listening to the stories of local old-timers, Yeats was inspired by the music of a leisurely Irish speech, folk poems, ballads and songs. Later, he will write more than one anthology of Irish folklore, fairy tales and poetry ...

Traveling a lot, he sought inspiration in his native Ireland and very often came home and stayed in the castle of his close friend, Lady Gregory. In discussions about literature with her and other poets and writers, the idea of ​​creating an Irish literary theater was born, which was later renamed the Abbey Theater in the name of the street. The Abbey Theater opened the first season in 1890 ... The work for the theater absorbed all the time and the poet's strength, Yeats wrote and staged several of his plays on the stage.

He travels to America and Japan with a series of literary lectures and becomes acquainted with the traditions of American theater. Yeats was a contemporary of his world-famous compatriots - Bernard Shaw, Jaime Joyce and Oscar Wilde. He was a poet and playwright, social and political activist ... As recognition of his services to society, one after another in 1922 and 23, the election of senatorm to the Irish Parliament, the award of an honorary doctorate at Trinity College and the Nobel Prize, followed. A subtle connoisseur of everything beautiful, Yeats loved beauty in everything that surrounded him, and women-poetess and actresses who played a prominent role in Irish public life occupied a special place in his life. Their physical and spiritual beauty nourished his inspiration, and Yeats kept his friendship with many of them to the end of his life. In his museum, a special place is devoted to this topic - "Women in the life of Yeats." A quite small room, more like a niche in the wall, is decorated in the style of that time - bookshelves, a desk with his manuscript and on the wall - portraits and photographs of beautiful female faces - the poet's muses ...

The dublin's museum has many rooms where we can see a lot of works and letters, photos and books of  Yeats are kept

Yeats' poetry is distinguished by rich imagination, connection with Irish mythology and beauty of style. And believe me - it’s not at all necessary to know English perfectly to understand the poems that the poet himself reads ... Their melody and his voice, which is not loudly heard in the halls of the museum, will take you to the era when Yeats lived and worked, and his own words are more precise all other words are summed up by his life - “I have nothing, only a book.”

William Butler Yeats was not easy and not only a poet. His poetry, inspired by the mythology of this region, awakened the spirit of self-consciousness in the Irish and inspired them to fight for the independence of their country. His poetic creativity in awarding the Nobel Prize was rated "as highly artistic and conveying the national spirit of the Irish people." Yeats's name is holy for all Irish people, a society of his name and the poet's heritage has been organized here for a long time, and every summer in Poti festivals are held in Sligo not only for adults, but also for schoolchildren, poetry competitions are dedicated to his memory, and the poet himself perpetuated this region, calling it   "The Land of Heart's Desire ..." -

The paints of the members of Yeats's family, London

This topic is so extensive that you can write a lot of the most diverse articles about the poet, but I’m polanging and I hope that having learned something more about the great Irish poet, after reading this short article, you will visit the places where he has been, worked and created for us. So that our life would be something big and filled with beautiful poetry ... whether it, William Yeats, or the poetic lines of other beautiful poets.