When buying a ticket to Ireland, none of us, even in the most terrible dream, expect to meet with the Irish Themis, as they say, you do not even wish the enemy. But not always, unfortunately, our life develops as we would like. Immigrant crime in Ireland and our criminals are here ... Who are they and what fate turned out to be behind the Irish grid? Probably, before breaking the law, it would be nice to know - how do the Irish courts work?

My Sketches from  the Courts of Dublin

So for the most part the Irish district courtrooms look

The Irish judicial system, in general, is similar to ours. The highest and final court is the Supreme Court, where disputed cases are sent from High Court and where the final decision is made on the basis of the constitution in agreement with the President.

High Court (everyone probably knows the Four Courts building on the embankment along the river) deals with both criminal and civil matters that were not found in the lower court - District Court - for one reason or another, or which cannot be heard in the lower court, deportation of illegal residents or those who violated the laws of the emerald island and has previous convictions, and here the fate of the defendant is not decided by the judge, but by the jury. High Court includes the Central Criminal Court, which deals with murder and rape, robbery and robbery. The High Court also listens to the cases of those citizens of the former post-Soviet space who applied for asylum with the Irish Government. Family issues, divorce cases, the legal department and the division of spouses' property, various violations with the license to sell alcohol and petitions of citizens, when the amount of their appeals to the court does not exceed 38,000 euros, are dealt with in a regional court-Circuit Court. A jury trial can also sometimes handle criminal cases.

There are lower courts in every district of Dublin or a small town. Here the judge is the king and God, and he alone adjudicates the case of the accused.

In cases where the accused has repeatedly violated the law of the Irish state, the judge decides to transfer the hearing of his case to a higher authority. 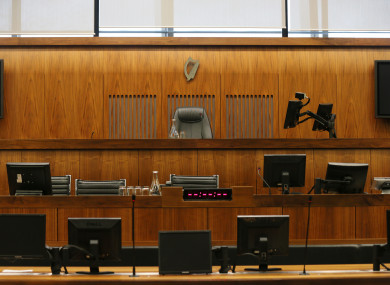 The modern premises of the district court in Tallagh, Dublin

In new, newly built buildings, the courtrooms are spacious, and they are tiny in old buildings. They are equipped with microphones, computers, and in the High Court there are large screens in the halls. Here, advocates and prosecutors, and, of course, the judges themselves are dressed in black robes and wigs, and all this is a bit like a century long gone, but subconsciously, I think, affects all of us and cannot but command respect from the judicial system. Here the secretary before the meeting loudly announces - Stand up! The trial is coming! - and those who work in court, it is customary to bow to the side of the judge whenever they leave the courtroom.

In District Court there is a defender - barrister - and the accused - defendant - but there is no prosecutor - the prosecutor. His mission is carried out by police officers from GARDA. They are lining up on the right side along the wall of the courtroom and are waiting for the secretary to call them to read the charges. It happens that one police officer accuses several people.

In the court at the Cloverhill Pre-Trial Prison, the cases of those who were repeatedly detained by the GARDA for theft, vagrancy, delayed or not paying a fine, with false documents at the airport, who were found to be in possession of drugs, who were released on bail, but did not appear, deal with the case. to court for retrial, family conflicts with the use of force. The defendants are behind the glass that separates them from the courtroom, they are brought into the hall by prison guards, and only the servants of the law, interpreters and access for children are present here. The state appoints a defender to immigrants, and before the hearing begins, the translator with the lawyer goes to a special room, where he talks to his client, specifying certain details before the hearing. You are breaking the law in a foreign country, and a compassionate - or how they will correct me - a civilized and democratic state worries that you will not be convicted without a proper understanding of everything with you in court of what is happening.

This is what Cloverhill Irish Prison looks like from inside, where I worked a lot - all rooms are locked, the interpreter is transferred to the accused with security and a barrister.

If you are not at odds with the law in your homeland, then most likely, sooner or later, but the same problems will also await you in a foreign land. As they say, unfortunately, inexorable facts and statistics ... Not all immigrants who violate the law are fluent in English, and in most cases the Irish court invites an interpreter for them. Last year alone, EUR 1,000,000 was allocated to pay for these specialists, and in the 2008 budget this amount was increased to reflect the realities of a rapidly changing Ireland. As you understand, this money comes from the pockets of taxpayers.

Some cases from the courtroom may be of interest to readers, and perhaps someone will draw certain conclusions for themselves. For well-known reasons, I do not name names.

The case was heard in District Court in Swords. It should be noted that I never know what the trial will be about until the moment when I stand next to the accused before the judge. One of them approached me before the meeting began, and specifying whether I was his translator, he began to tell me how he had changed, what a zealous Christian he now became, how he looks after his children, while his wife works, apparently naively believing that I can influence the decision of the judge. I listened to him and thought - what did he do?

He stole several bottles of beer at the store, but it was already a repeated theft in Ireland, and the judge sent his case to another court.

Very often, our people are detained for drunk driving, the lack of insurance and other necessary documents for the car, for the unfastened seat belt. If the accused has no previous convictions or the GARD has not been delayed, the judge shall impose a fine, and the highest - 1,500 euros - for the lack of insurance. If the accused was detained in a drunken state, then the punishment is always severe - the judge deprives of the right to drive Iashina for two or three years. I want to note that, according to my observations, Irish judges treat immigrants with a rare understanding.

If a person stumbles for the first time and because of sheer stupidity, the judge often asks the defendant whether you want to donate money to charity or to the hospital as a fine for your offense.

In court, Dun Laoghare somehow had to transfer for a 26-year-old girl from Lithuania who was caught when she withdrew 60 euros from the account card of a customer of the TESCO store where she worked. As the defendant explained, being in a constrained financial situation, she wanted to send money to a mother suffering from cancer. The GARDA police officer and her public defender did everything possible to prevent her from being sent to prison, but the judge made a harsh decision. Theft is theft, and it cannot be justified by questions of illness or temporary unemployment.

I had to translate several times for drug addicts who started using drugs in their homeland and tried to continue the same in Ireland. One case simply struck me that the Irish police released my defendant several times in shoplifting, when he tried to get money for drugs in such ways. In the end, he was arrested, transferred to jail on the day of the trial and presented a pitiful spectacle, hardly able to understand what was happening. The case was transferred for lack of evidence, and I do not know how it ended for a young guy from Latvia, but after the meeting his mother approached me and told me that she paid all the damage done by her son to ease his situation in conclusion. Sometimes, if any of the relatives of the accused paid the damage, the judge may close the case and release him. This, of course, is solved in each case.

In the Irish judicial system, an interesting, in my opinion, points system operates in the work with drug addicts.

In the center of Dublin in the court of Richmond in one of the courtrooms daily hear the cases of people who use drugs. They are of different ages, but it was interesting for me to observe that the judge treats them like crazy children. Probably every drug addict is pleased to hear such words from a respected judge - ‘’ You, Mister such and such, today look much better than the previous time. It is evident that the treatment is for you. You agree, is it true that you need to be treated? ’’ Caught red-handed in possession or use of drugs, they are sent to rehabilitation centers for treatment, and every week social workers are present in court with them. If their ward violated the regime or missed the school, the judge removes a certain number of points, and vice versa, encourages for good behavior. These are really deeply sick people from dysfunctional families, many of them with physical defects, who have not seen anything better since early childhood than drunkenness and beating their parents ...

If the workers of the law treat immigrant offenders with an understanding of their difficult fate, then this cannot be said of all Irish people. I remember a difficult case with

young workers from Latvia who shared a house with other people. Trying to protect the honor of his girlfriend from insults of his neighbors, he inflicted damage to the property of the owner of the house, and he literally threw him and his family on the street. Without work and without shelter, on the day of the trial my accused was already on the verge of a nervous breakdown, I transferred to the judge that the accused was not feeling well, and his case was transferred.

Later on the judge ruled for a small fine in favor of the homeowner.

My job as a translator gives rich food for thought, and I wonder, looking at some of my defendants — was it worth it to change the flea, as they say in Russia, and change one prison to another, even such a comfortable one like Cloverhill?

We all remember our rights, but what about our responsibilities and sense of responsibility for what comes to us - people from the former post-Soviet space - do the indigenous people of the emerald island think?

Allow me to remind the final words of the judge in one case where I had to work, which I heard in the courtroom in Swords, when the judge ruled a fine of 150 euros to two ladies from Lithuania caught by the guard on theft in the shopping center Dunnes Stores '': '' Do not forget that you are in this country, guests. ''