With a Smile on the Irish Climate

It was snowing in Ireland on March 18, 2012. This was all the more striking because it didn’t fall an inch in all the winter months. The snow was wet, almost like rain, lay on the asphalt and immediately melted, tiny islands lingering for a short time only on the green grass ... I watched this nature whim from the window, wondering to myself, and I did not want to believe that here in Ireland, perhaps there will be a real winter with snow and strong winds.

Emerald is called this island and it’s hard to disagree. A small piece of land, surrounded on all sides by water, which by car from the east coast to its western coast, washed by the Atlantic, is just nothing — some 3-4 hours ... an island where green is dominant in abundance everywhere ... generously endowed by nature, where there is everything - freely stretched fields and high mountains, flowing, lazily flowing rivers, abundant in trout and salmon, lakes with crystal clear water, lush grass, as if just painted with fresh colors, on which year-round, serene sheep with funny black faces and stolid Irish cows graze ... an innumerable variety of shrubs, from dark green to bright-green, whose existence in nature does not have to be suspected before coming here, various flowers in hanging baskets adorn Irish at home and delight the eyes and in inclement winter months - all this is Ireland, a paradise and expanse for many birds arriving on the island to winter, and everyday life flows here still slowly about, like a couple of centuries ago, because it is not in the nature of the Irish to hurry, and the view of Ireland, it is worth a little drive off from Dublin, and in the 21st century looks like a pastoral idyll.

Floods in the western regions occur with regular constancy.

The warm waters of the Gulf Stream wash the island, thereby affecting the Irish climate, thanks to which winters here are a rather conventional concept: usually windy, rainy, they quietly turn into almost the same cool spring and summer. And if you get your eyes on a T-shirt, on which people with an umbrella over their heads and with the inscription - Four Seasons - do not be surprised, for this is the holy truth about the Irish climate, and it is better not to leave the house without an umbrella. In the year of my arrival, the winter was extraordinary, with dry and warm days, in the high and absolutely cloudless sky the sun shone so brightly that it was impossible to do without sunglasses, then I involuntarily had a comparison that this cloudless sky is supposed to be, say, where —But in South America ... and even palm trees everywhere growing on the island, they puzzled me how they got along together - this is not Mexico, in fact! Fascinated by that atypical winter, I hurried to draw conclusions — they say, what a beautiful and warm winter in Ireland! A-h-h.. no ....

In January and February, stormy winds always rage, sometimes it is difficult to fall asleep from the squeak of trees bending from their gusts ...

B winter dark and long evenings dampness seems to penetrate the house from everywhere ... and it happens that the sun does not appear for several days; the unkind and gloomy sky seems to be about to fall to the ground, the wind still strives to knock out the huge trees near the house in which I live, and it is sometimes difficult to fall asleep from the squeak of branches that bend from its gusts, everyone complains about bad weather and depressed mood, and the Irish strive to slip away for a week or two somewhere to warm lands, to their beloved Spain or Portugal ...

The winter 2018, especially bad for rural farms and small villages

According to the unofficial Irish calendar, winter begins on November 1 and February, respectively, the Irish people consider the beginning of spring.

In February, trees and shrubs bloom, and rose petals everywhere of the wildly blossoming blossom-tree so beloved by the Irish are strewn with roads and placed on the hoods of cars. At this time, Ireland reminds me very much of Ukraine during the flowering of gardens, and the air temperature already reaches 15-17 degrees Celsius.

Sometimes there is no summer at all, to which we Russians are accustomed - with exhaustingly hot days when the air is weary from the grass in the meadows and the sun warms up everything on earth and we are covered with summer languor and peace ... here it is damp and foggy ...

Due to rains lasting several days and severe storms in Ireland there have been floods more than once; I was told how the River Liffey, dividing Dublin into two parts, burst its banks and filled the city with its waters. I did not witness these sad days, but in the winter of 2007, radio and TV broadcast about the impending storm from the Atlantic and asked coastal residents to prepare sandbags and strengthen dams in advance. The Irish, with their extraordinary sense of humor and a light attitude towards life - I do not mean the epithet - frivolous - did not particularly attach importance to poor weather forecasts, because all life on a piece of land surrounded on all sides is water so what is there to worry about another element? She, like many others, can be waited in the pub for a beer.

If you think that everyone knows about this not always pleasant phenomenon of nature, like rain, then I dare to assure you that you are mistaken. Irish rains deserve a separate discussion! And if I were a scientist, I would certainly compile their classification. They are so diverse that, really, it would be worth talking about them separately.

Once in Riga for a conversation, the taxi driver complained about the Irish unbearable climate, which is why he left. Well, it’s not customary to argue about tastes, in my opinion, the climate in Ireland is beautiful, if not perfect, and the island’s residents themselves say that it’s not too cold and not too hot. As Tatyana Ustinova noticed with a bit of irony in one of her detectives, in Dublin it is always 17 degrees. And she is not too sinned against the truth.

And in spite of the weather, which I briefly told about here, come to Emerald Island to enjoy your fabulous '' Iirsh Honeymoon. '' .. Just do not forget to grab an umbrella ... 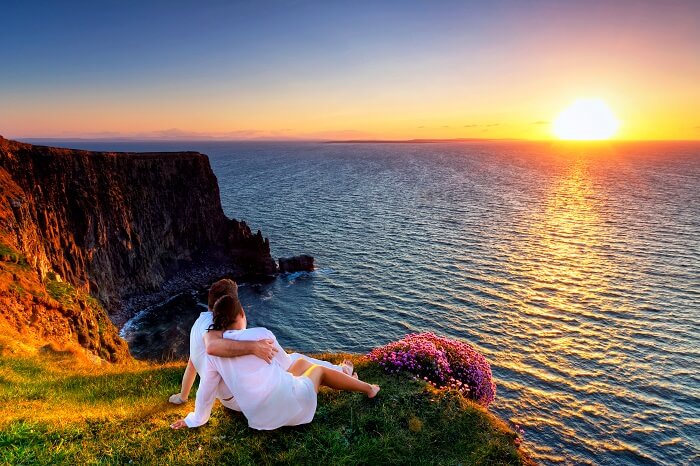 Honeymoon in Ireland is an incomparable adventure before your family life