An infrequent guest on the Emerald Isle, summer, encouraged me to get on a bicycle and drive along my favorite route ... The weather has been magnificent for a few last  days, it's very warm and no rain and can't be better weather to leave finally the city, and have a wonderful few hours away from its civilization, touring the little-known places of the Emerald Island ... traveling in Ireland by car or bicycle
.. So, my new column was born:
''Backstreests of Emerald Isle''

The view of Strawberry Beds over Liffey valley

Quite often in life it happens that you live in a certain place for a long time, but you also do not suspect that very close to you is something that one day you will discover for yourself with surprise and joy and you can not live without it, because it becomes an integral part of your life, the necessary, where you derive positive emotions for yourself, and where you can hide from the tiring bustle of urban civilization ..

It was exactly that what had happened to me several years ago when I lived in one of the densely populated districts of Dublin, in Blahchardstown - quite a long time,  when once my Irish friend  said: '' I should show you '' Strawberry Beds'', the place of my childhood' ... '' With a curiosity of child who is waiting for adventure, I was happy to accept his proposal and extend MY IRELAND.
My acquaintance was driving me around a completely unfamiliar earlier, narrow and hidden from the main thoroughfares and an unusually picturesque road from Blanchardstown to Lucan and since that time it is located in a quiet lowland near the Liffey River, and in my opinion, a very beautiful valley interspersed with hills and steep turns, has become one of my favorite places on the outskirts of the capital of Ireland.

I fully admit that many of the people living in the Lucan area  and Blanchardstown  (especially those drivers who constantly have to travel from Blanchardstown to Lucan) partially know this way, if you go to Lukan through a railway crossing, but the road along which every day people returning from work are standing in a traffic jam, only a part of Strawberry Beds ... I'm going to tell you more  .

From my house in the center of the Blanchardstown village on a bike ride on that delightful sunny morning, I drove along the main road leading to the center of Dublin, through the Castlecknock-in Phoenix Park and after a short walk along the park paths, turned right onto a narrow road, to go to Chapelizod through its side gate, now you can see the road sign to my favorite fish restaurant, ''Anglers Rest'',  which so successfully settled down at the very beginning of "Strawberry Beds" ..

The river Liffey at the dawn

I was lucky that day extremely - it was a smart summer morning, one of those when the townspeople curse the unpredictable weather of the island, if that day falls on weekdays, and everyone has to spend it in offices ... I saw the valley beyond Liffey, and behind this In the wide green valley, I saw the Dublin high-speed roundabout, the M-50, on which huge trucks from England, Germany and Spain and other EU countries raced with goods for various purposes throughout the island.

'Strawberry Beds", as I have already mentioned, is quite a narrow road, it stretches along  the river Liffey and winds after it, and this road is practically hidden from the eyes, if you do not know about its existence, because for decades in a rapidly evolving and which became an industrial area of Blanchardstown, which local old-timers remember a small village, built a new road, from which people return from the center after work in Lucan. But here very much has been preserved almost in the same way as old photographs show us .. 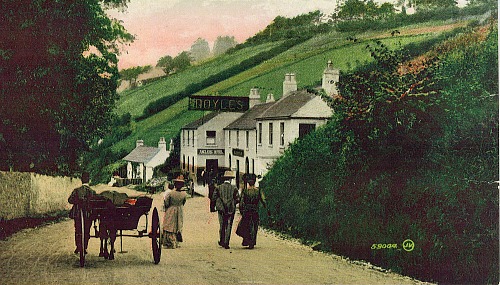 After resting in the courtyard of the favorite restaurant and enjoying the amazing morning coffee with a snack with the smoke of the open fireplace, I continue my journey further ... The sports club on the kayak was located near the restaurant, and without curiosity, I directed the bike and drove into the gates of the club. Several athletes practiced on one- and two-seat kayaks, driving them between the narrow gates set in front of the rumbling waterfall, and trying not to fall down .

By Liffey on canoeing

Admiring those who do not want to sit by the TV and prefers to fight against themselves and water elements and listening to the 'music' of the waterfall, I drove slowly along the narrow road that was now going down, pressing the bicycle to the very side of the road to leave space for always hurrying cars. By the way, cars for '' Strawberry Beds '' do not pass this often and often. On the other side of the '' Strawberry Beds '' there are elongated, lovely cottages, which in past decades were small dairy farms, where people kept different cattle and supplied milk to the townspeople. Stopping again and coming to the shore of Liffey, I saw several fishermen with fishing rods ... there was silence and so quiet around me that I was overwhelmed by the sensation that in this world's edge I am absolutely alone ... well, apart from the ever-present bees and bumblebees. .. the time for them to collect nectar, for all the meadows on which, apparently, the cows grazed once, are now covered with flowering tall grasses, and many of the bushes along the roadside also bloom ... nothing distracts me from lie on the bank of the river to sunbathe ... when you are lucky enough to lie down s in Ireland on blooming grass under such a hot summer sun.

After driving even further, I see a pub. On this summer day the pub, to my surprise and joy, was open, and I, of course, could not deny myself the pleasure to finally enter and see - what is it inside? ... No, do not tell - all the pubs in Ireland differ from each other and have their own "face", and that's why they are so interesting.

But how else to maintain a lucrative business and how to differ from its neighbors - competitors? .. Only 50 years ago in pubs they did not serve or prepare food, only men looked in the pub to sit and relax after a day's work and drink a glass - another .. Yes, if a glass ... another ... Their wives came to the pub and quite often, literally took their breadwinners home ... I opened the door of the pub and stopped at the door, looking curiously at the parties ... Hall of the pub '' Strawberry Hall '' - a very small one, behind the counter there were people, they drank beer and talked. Seeing me, looking at the pub and standing at his door, I was offered to pass. I joked, saying that I just wanted to see, finally, how the pub looks from the inside, because it was always closed when I used to go through the '' Strawberry Beds '' by car, that I'm a journalist and I want to write about these places. Do not put a finger in your mouth, then someone said: "Well, now it's open, and it's time to sit with us and have a drink, since you're a journalist." Having laughed, I thanked the local patrons for the invitation, and saying that today I was driving, having in view of my bicycle, I went further, promising nevertheless that I would somehow come back again and have a beer with them ..

If Liffy flows to my left, then on the right side, on the hills, somehow people managed to build houses, and very steep narrow roads where two cars can not be parted, are taken to the side and high up to private estates. Well, I can not get there, and you can not break the boundaries of private property.

The picturesque road along the river Liffey

All the good things come once its completion and my bicycle - walking tour of '' Strawberry Beds '' found a logical ending at the entrance to another rapidly upsetting new area of ​​Dublin, Lucan, but I did not want to go there, and I turned and drove all my way back, continuing to absorb the summer colors of the Irish summer, trying to remember everything I saw again in this fabulous day and tired immensely, absolutely happy, I returned home and wrote this road essay for all those who constantly reads my blog and who is waiting for me to tell stories about - in which places of the Emerald Is worth to get along ..

So when you come to these picturesque lands, you will only discover your "Strawberry Glade" in Ireland, where strawberries are grown all year round by farmers in greenhouses all over the island, but this is the "tasty" name of Strawberry Beds so and left behind one of the "Zakolkov Ireland" and which reminds me of my carefree childhood ... and the extraordinary jam that only our grandmothers could cook ..

The pieceful way to discover Ireland at Strawberry Beds